Another proper Yacht tied up at Purdys Wharf on Tuesday. The Hetairos is 66.9m long, and the ketch rig was built with masts that reach the maximum air draft of the Panama Canal. The Yacht was built by Baltic Yachts in 2011, and can sleep 10 in 5 cabins.

More Photos, including Interior shots can be found at Charterworld.com

I originally set out to Photograph the Marie, but it had sailed before i arrived.

#Marie is tied up @PurdysWharf this morning. Certainly stands out from some of the yachts that visit us. @developns pic.twitter.com/6cQTxBVyCe

last nights waterfront walk brought this collection of Trawler style yachts from the US. They were tied up at the Museum Wharves.

The Bella Vita spent a few days at tall ships Quay, before sailing for Lunenburg Saturday Morning. At 255′ in length, she is the largest purpose built yacht to call in Halifax. The largest yacht to Call in Halifax was the Lone Ranger, which then belonged to a google co-founder, and converted from a ocean going tug.

Bella Vita was reportedly owned by John Risley of Clearwater seafood fame, though it is now available for charter for $640,000us/week +fuel and food.

Most yachts that call in Halifax are in the 130′ range or smaller, though some of the sailing yachts have reached 180′

JTFA just tweeted that 8 people were rescued from a sailboat early this morning off Lunenburg.

A quick check of marinetraffic.com appears to show the vessel Esprit De Corps IV aground off cross island. it stopped broadcasting AIS just after 6am this morning.

Esprit De Corps IV is the former Amver Sport 1, the VOR60 yacht that was owned by Derek Hatfield, as Spirit of Adventure. Hatfield died in 2016. the yacht was a frequent participant in the Route Halifax Saint Pierre and Marblehead races.

I have sent a message to Atlas Ocean racing for confirmation. – Updates to Follow.

At 4am AST on the 22nd of May, whilst returning from a season of racing in the Caribbean, SV Esprit de Corps IV was shipwrecked on Cross Island, NS.

20nm before Lunenburg, NS, her final port of destination, and under a very reduced set of sails, gale force winds complicated the manoeuvre of dousing the sails before entering the chanel leading to Lunenburg. The strong gusts and a loss of the ability to use the propeler led the boat to drift towards Cross Island where she ran aground. The crew prompted a PAN PAN to get the boat towed but later a water breech made the situation to upgrade to MAYDAY.

Maxime Grimard, skipper of the delivery of Esprit de Corps IV, acted in accordance with his safety in offshore sailing certifications and with the team’s safety procedures by protecting the crew first and foremost.

The 8 crew members of the sailboat wish to thank the Canadian Coast Guard and the crew of MV Salvage Monarch for their exemplary assistance in evacuating the crew. All members of the crew returned to land safe and sound.

After the crew, the team’s next priority became the recuperation of the vessel for environmental reasons and in order to salvage any equipment left. The team has set a protocol in motion to handle the recovery of any wasteful debris, in collaboration with Environmental Response of the Canadian Coast Guard.

Atlas Ocean Racing, Maxime Grimard, and Gilles Barbot (owner and official skipper of the boat), the insurance company and local experts, are actively seeking the most cost-efficient and practical solutions to recover what’s left of the boat as soon as possible.

We will keep you informed of the next steps in the recovery of the shipwreck. The goal is to return the boat ashore for inspection and evaluation of damage and potential repairs.

Thanks for your support,

They also posted that the yacht had been looted since it went aground, and before they could return to remove fuel.

#CCGRescueStories: This week in Mahone Bay, #NovaScotia the Inshore Rescue Boat team rescued 8 people from a vessel that ran aground. There were sustained winds of 25 knots and 2 metre seas. The crew worked hard to ensure all were safe. #CCGProud pic.twitter.com/ZByWdcET8h

The Futuristic Bridget Bardot Arrived in Halifax Friday Morning. The vessel is owned by the Sea Shepard Conservation society. I covered a brief history of the vessel, and Sea Shepard in this Herald Column.

Originally named Cable and Wireless Adventurer she was built for the purpose of circumnavigating the world in less than 80 days. This was successfully accomplished in July 1998 in 74 days, 20 hours, 58 minutes. Sea Shepard acquired the vessel in 2010. The 114′ long trimaran is powered by two 500hp engines, and has a top speed of 50km/h.

Sea Shepard has a Halifax Chapter, who can be found on Facebook

In this weeks Herald column, I talk about the sure signs that summer is coming, when the pleasure baots enter the water. Another sure sign is the beginning of the Wednesday night race series.

These hardy sailors were out in the middle grounds last night in intermittent rain and fog. – but they photographed well. 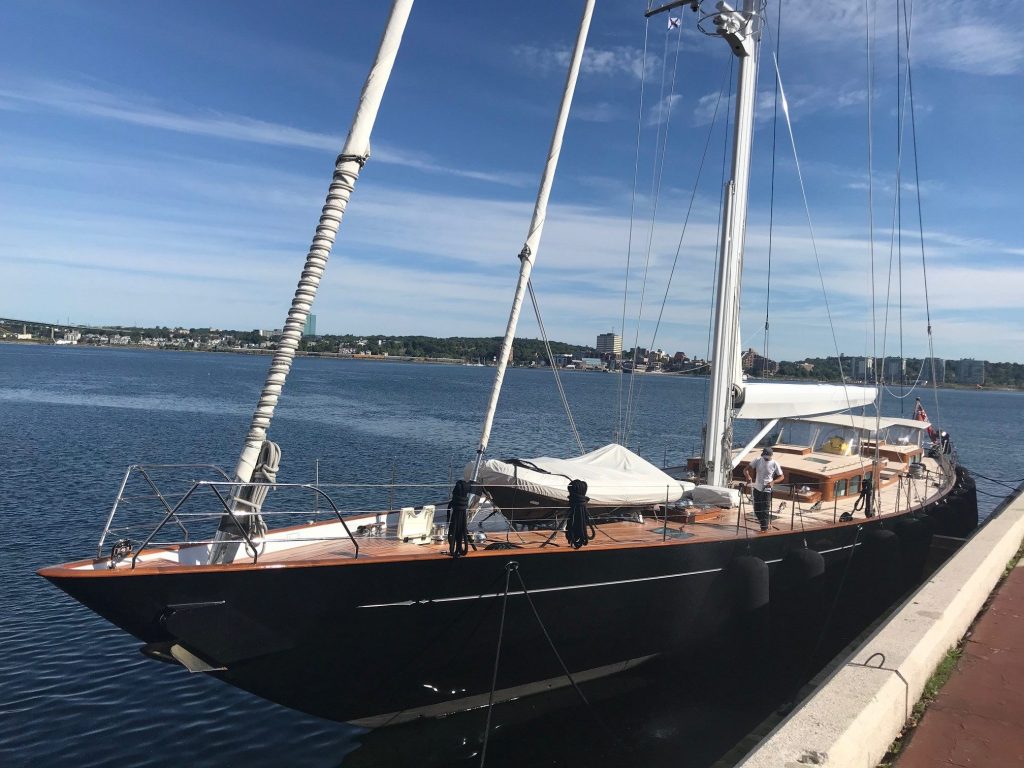 the sailing yacht Action Arrived this morning and tied up at Purdys Wharf. With Ngoni on the other side, Purdy’s is a great spot to check out some proper Yachts. 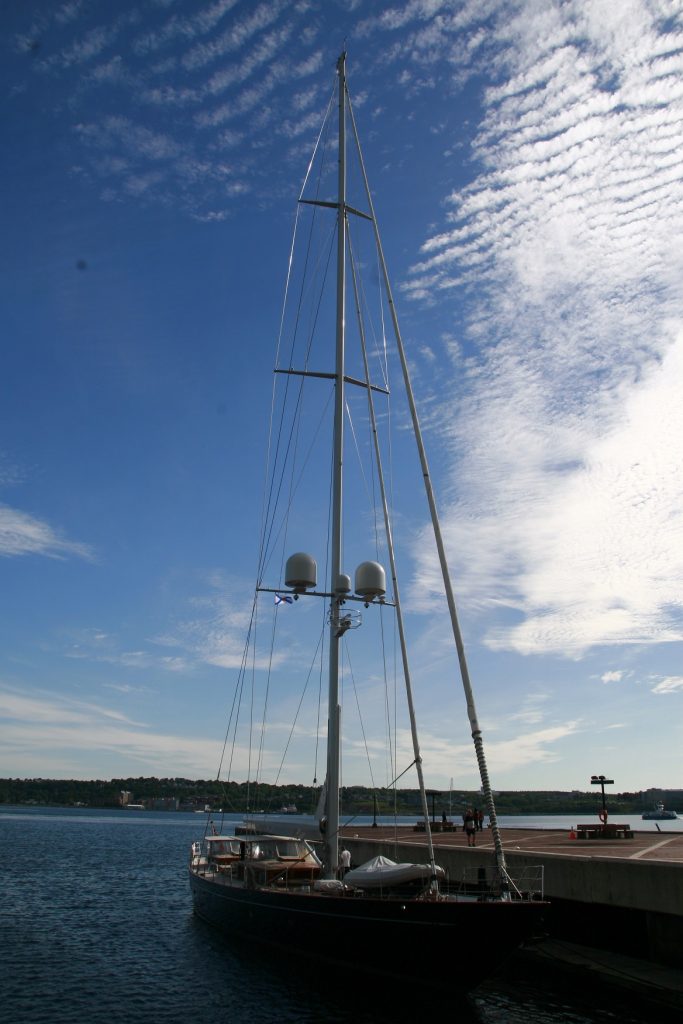 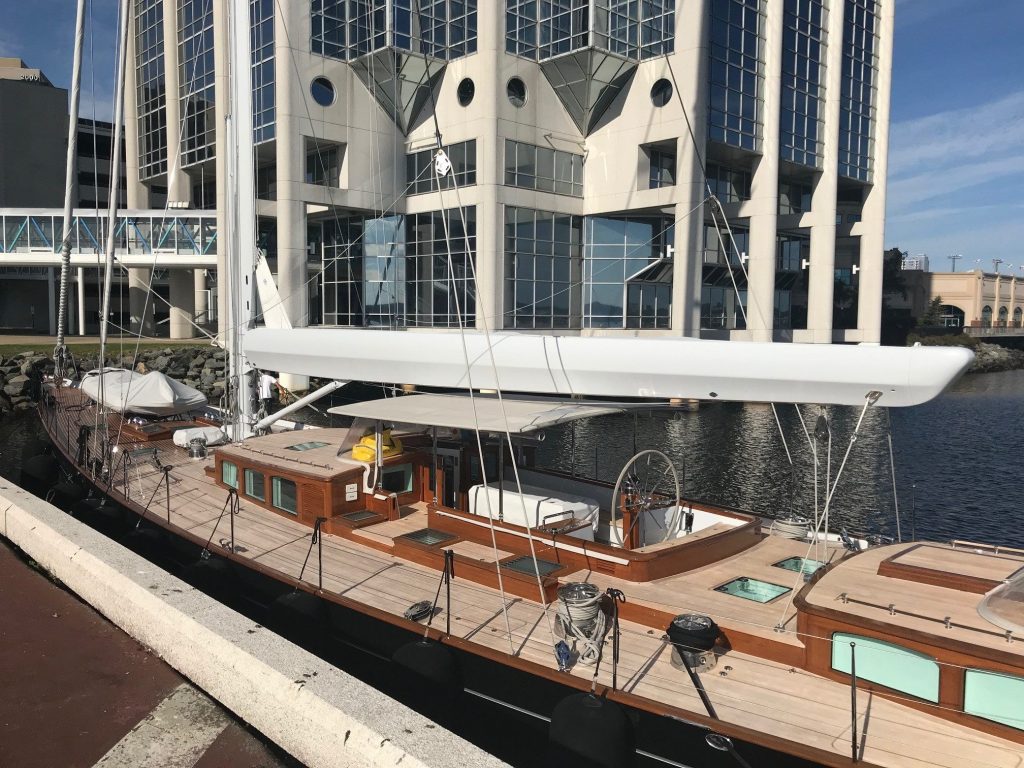 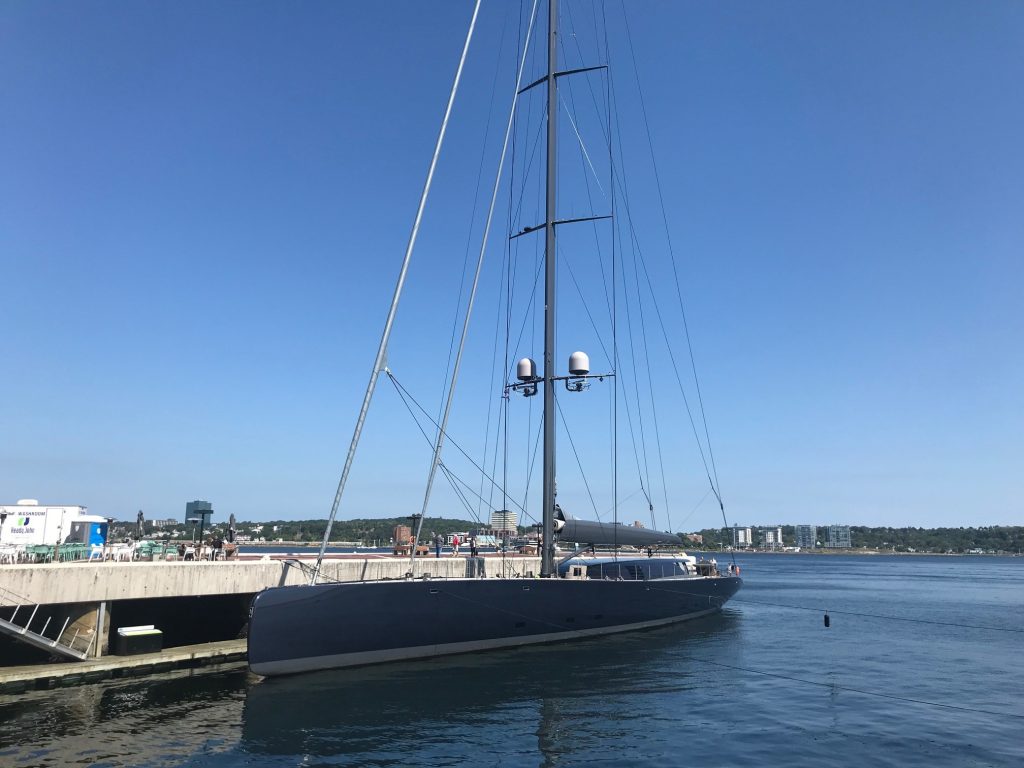 The British sailing yacht Ngoni was towed in by Captain Jim last night, and tied up at Purdy’s Wharf.From AIS Tracks, she was left Rhode Island, and apparently had an issue of Liscomb NS. She made her way to Halifax, and was towed into the harbour. 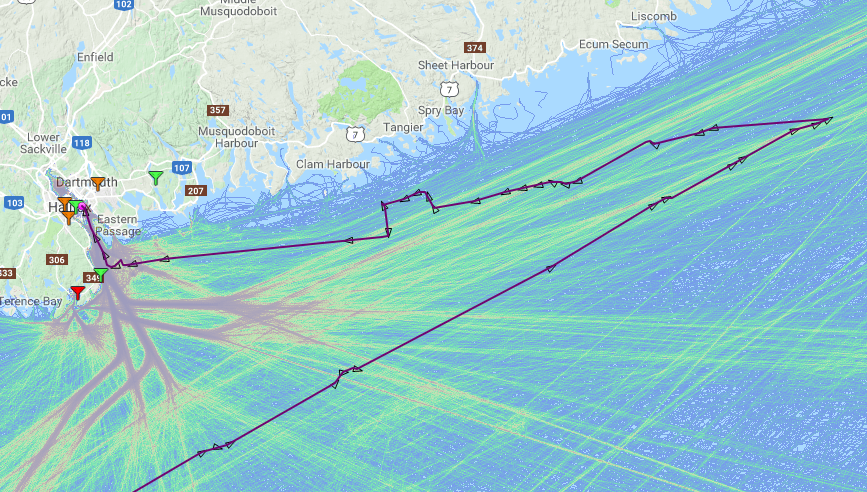 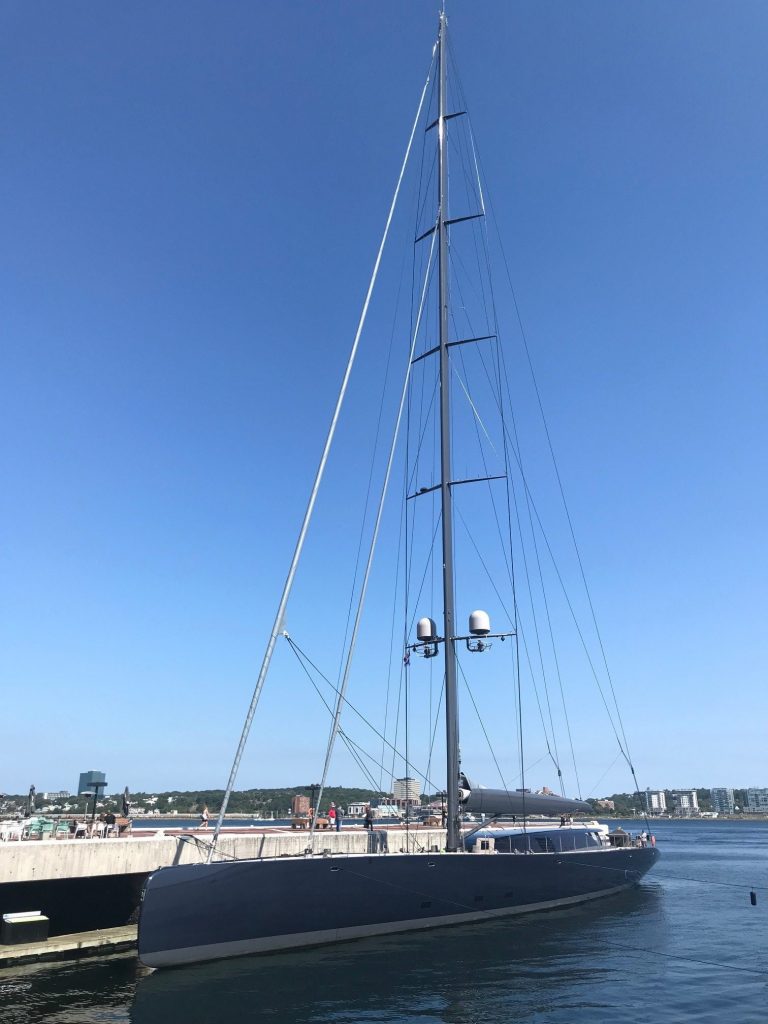 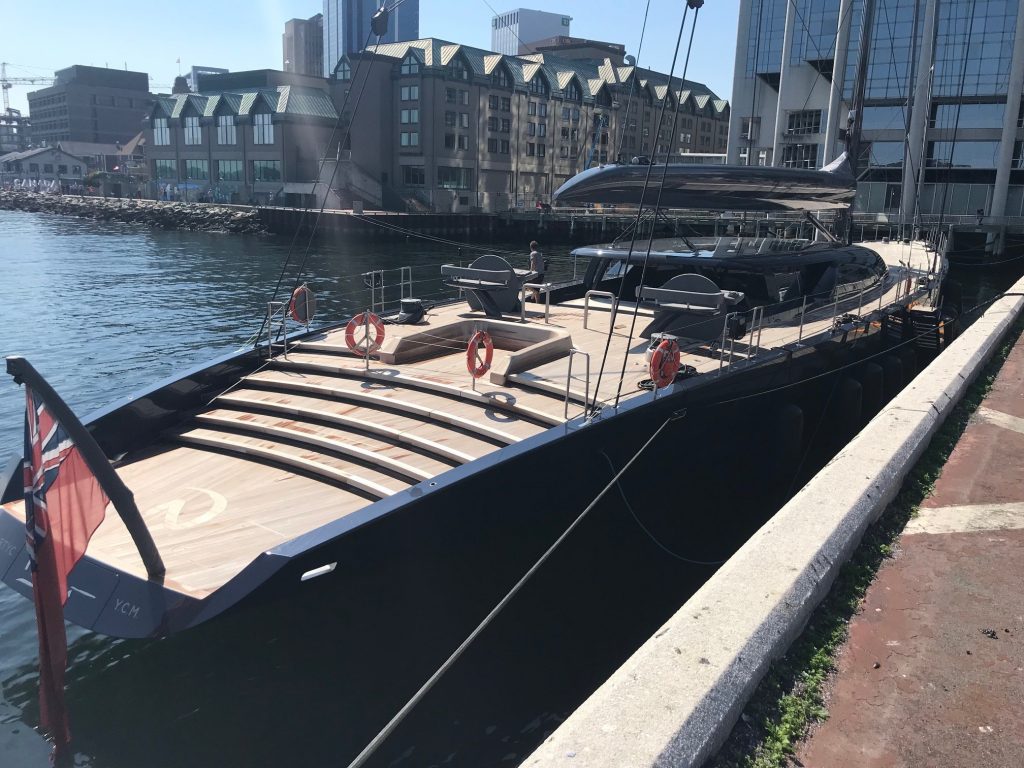 When I went by her today, someone was working on the radar. 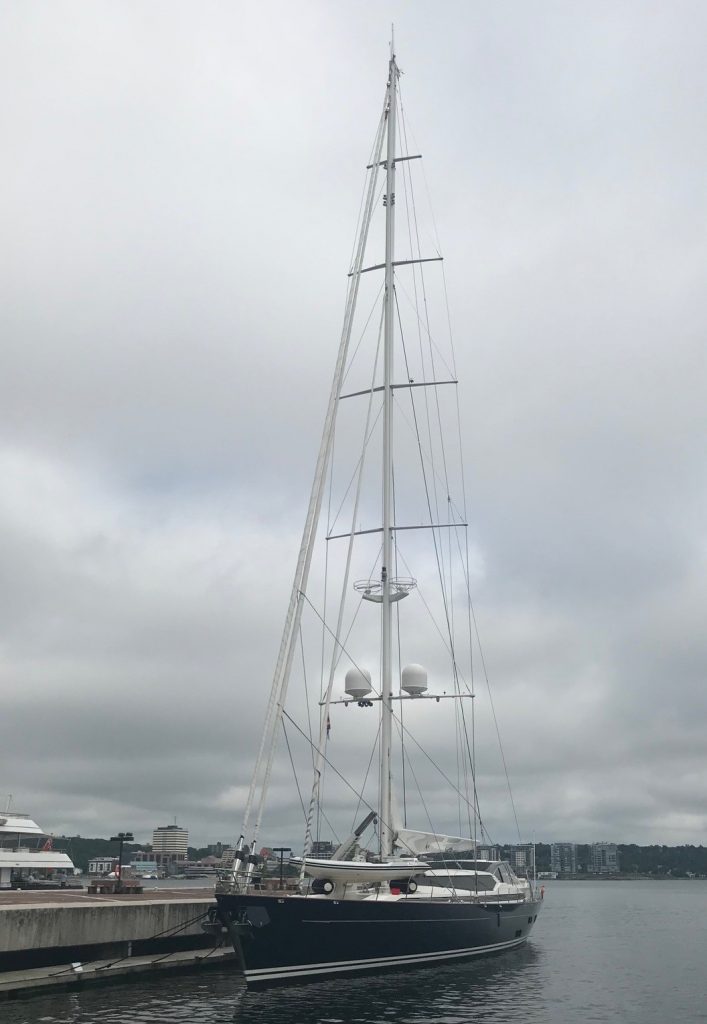 (Above) The 140.75ft Custom sail yacht ‘Koo’ was built by Vitters in Netherlands and was delivered to her owner in 2002 as Vent D’est . She was last refitted in 2016. Registered in London England, She sleeps 8 and carries a crew of 6. 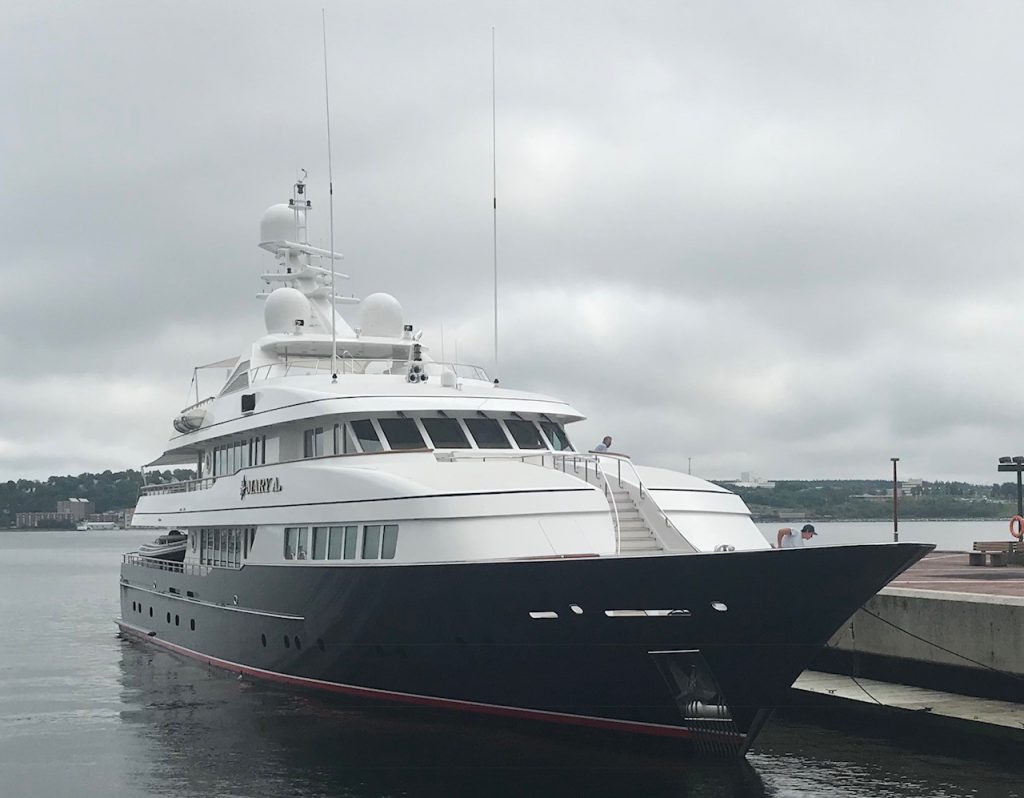